This was my first time attending Rubyconf Brasil and it is one of the best experience I have ever had at a conference. The conference for the speakers started a day early. There was a barbecue party arranged at the Codeminer HQ. It was a good idea since a lot of speakers were not from Brasil, so it made it easy to get to know a few people. Moving onto the venue for the conference. It was at the Frei Caneca Theatre. It is a 16 floor building which has a theatre for the conferences, a shopping mail, many restaurants, corporate office and a lot more which I could not explore. The conference was at the 5th and the 6th floor. Here is a picture of the theatre.

People started coming in around 8:00 am and by 8:15, it was jam-packed. A 1000 people attended the conference. It started with George Guimarães’s talk on “Dogmatism and software development” and followed by a coffee break, it was Ruslan Synytsky’s talk on Jetlastic’s new ruby implementation. Both the talks were interesting and were single track conference.

On a side note, most of the talks were in Portuguese, so there were translators available for all the English-speaking people.

After Ruslan’s talk, conference was divided into a 2-track conference. Next up was talks on Elastic Search and Puppet using Ruby in the other track. I choose to attend ElasticSearch talk since it is an area of interest to me. Pedro Franceschi  spoke about elastic search and how using it in its core way is the best approach rather using a ruby wrapper for it because it limits the way you could use it. Couldn’t agree more with him!!

It was time for lunch. There were so many restaurants in the building, everyone had a varied choice of what they want to eat. After the lunch was talk on “Quality software engineering for your data center” by Ben Langfeld. I met Ben at the barbecue and was already looking forward to his talk. He is an Englishmen but speaks Portuguese just like a local. Even though it is always very difficult to keep pace with the talks which are just after lunch. But it turned out to be one of the most interesting talk at the conference. He talked about Devops and how it is not something of a middle ground between development and Operations and is much more. In the other track, it was about “Migrating an application from MongoDB to PostgreSQL” by Marcio Trindade. I wanted to attend both the talks but I have just not found a way to teleport yet 😦

Next up was me. I think it went well as many people came up to me and appreciated it. Anyways I really enjoyed the talk and learned some very important lessons about giving talks. In the other track was a talk on “iOS on Rails” by Cezar Carvalho Pereira. Another talk which I wanted to attend, but definitely not at the cost of skipping my own talk :). Just before the coffee break, there was one more talk scheduled. And it was time for Vipul and Prathamesh to take the stage. They talked about “Building a ORM with AReL: Walking up the (AS)Tree”. I could not follow the whole talk as I was still making notes of how I could have improved my talk and was asking for reviews from people sitting around me. One of the most important review which I received was that I should have spoken a little slow as not many people understood English and not all of them had the translators. Point noted for the future..!!
In the other track it was about “Convention on creating and deploying Rails applications” by Eduardo Fiorezi.

Followed by another coffee breaks, it was time to choose between “SOLID principles through tests” by Sebastian Sogamoso and “My (Re)Architecture process, from Zero to Hero!” by Lucas Martins. Well I have been reading a lot about Solid Principles and how TDD fails to drive us towards the correct design, I choose to attend this one. Because topics like these are open to debate and everyone has their own opinion, and I love to hear discussions about this. It was also one of the most interesting talks at the conference.

Last talk for the day was a very unique talk. It was titled “Leadership for the Future” by Murilo Gun. He is a standup comedian, entrepreneur and have spent 10 years in technology. It was one of the talks I badly wished I knew Portuguese. He talked about the bets he places for the future. Although the translator was doing a great job at translating, some jokes were just meant to be understood in Portuguese. 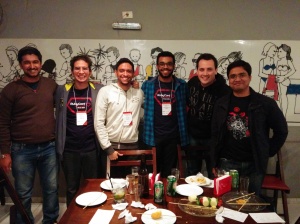 And it was finally the end of Day 1. Wait.. it was the end for the talks not the conference. Now it was time for happy hours at a pub very close to the conference. Made some friends here too.

Day 2 of conferences usually have less attendance for the morning sessions, but not here. I guess it was because Koichi Sasada was supposed to speak about “Growing the Ruby Interpreter”. Nobody wanted to miss this one. After this it was time for a coffee break and then another choice to make between “Integration Testing SOA Rails Apps” by Travis Douce and “Testing the security of your applications with Metasploit Framework” by Daniel Romero. This time around I did not have to make a choice as I had an extended coffee break talking to few people.

Then it was another of these design-tdd related talk. It was titled “Improve your Rails application design with better TDD” by Marko Anastasov. By now you would have guessed that I would have attended this one. Marko started off by showing a really complex piece of code and how he used TDD and design patterns to arrive at the correct design and maintainable codebase. In the other track Thiago Scalone spoke about “MRuby – Minimalistic ruby on browser or mobile”.

Followed by lunch, it was time to hear about “Tricks that Rails didn’t tell you about” by Carlos Antonio da Silva. It was another just-after-the-lunch talk, so you know it was really hard for me to follow all the time. But I really liked his talk and would definitely wait for the videos to be published for this one. The next talk I attended was about javascripts titled “You still don’t know how to write proper Javascript for Rails applications” by Jean Carlo Emer. In the other track, Ricardo Valeriano and Arthur Zapparoli spoke about “Lotus: A true OO Ruby Web Framework”.

Next up was Matt Campbell. He is a product of a Rails Bootcamps and he talked about how he left his well-to-do finance job one day and joined a Rails bootcamp, his experiences of the bootcamp and how the education system is screwed in the US. Personally I do not think bootcamps are a replacement of a college degree. And they would be of help to someone who has a programming background and want to learn something new. But that’s just my opinion. In the other track Hanneli Tavante spoke on “Java headache? Torquebox!”. Next up was a talk on “Rock-Solid Web APIs with Rails” by Carlos Souza and “Building your own Credit Card Company” by Eduardo Mourão. I attended the latter one. But unfortunately took the wrong translator with me and it took me a little while to realize this. And by the time I realized it was pretty late. But it looked like people really enjoyed his talk.

Now we were very close the wrap of the conference. Fabio Akita spoke on “The last 10 years through Rails and Ruby” and how we should all follow our passions and do not worry about the consequences. One of the things I really liked was how he accepted the fact that even after giving over 100 talks, he is still nervous every time he gets on to the stage. It was a good closing key-note and at the end all the speakers did some pictures on the stage and also took a selfie..:)

Overall it was a great conference, great experience for me as it was my first conference abroad and lots of memories. And as we say it here, OBRIGADO..!!

One thought on “My experience at RubyConf Brasil, 2014”